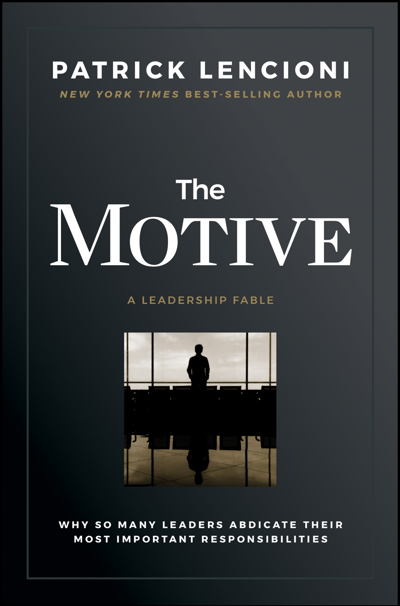 The Motive: Why So Many Leaders Abdicate Their Most Important Responsibilities

Buy it on Amazon

What is your motive to take a leadership position? Is it because it’s the next step on the organisational ladder, or is it to get the opportunity to serve? This book aims to challenge us to look at our motivations for leading. It also looks at how the two types of leaders handle 5 different responsibilities.

The book is divided into 2 distinct parts - a business fable and a practical description of the model. Most of the book is a fictional story that presents a conversation between 2 ceos on how to be a good leader. The model extracts the lessons and drive the point home.

Please don’t be a leader, unless you’re doing it for the right reason, and you probably aren’t!

What are the different types of leaders?

There are 2 types of leaders.

Leadership is meant to be a joyfully difficult and selfless responsibility

Responsibility centred leaders believe that being a leader is a responsibility and serving others is the only proper motivation for leadership. They believe that it is their responsibility to do the most mundane and uncomfortable jobs. Keeping the organisation moving in the right direction is their actual job. They understand that the experience of leading is challenging and that sacrifice and suffering are inevitable.

Their motto might well be “It’s good to be the king.” And few “kings” want to be managers

Reward centred leaders believe that being a leader is the reward for hard work. They are drawn by the attention, status, power and money that it brings. They think that a leader's experience should be pleasant and that they should be able to choose what they work on.

Why do reward centred leaders not make good leaders?

Reward centred leaders won't embrace the demands of leadership. They will pick and choose how they spend their time and energy based on what they will get rather than what they need to do as a leader. They will avoid the unpleasant situations and activities that leadership requires.

How the different types of leaders deal with different situations/responsibilities?

Responsibility centred leaders actively build their team. They take part in the emotional and uncomfortable conversations that team-building always involves, even though they may not look forward to it.

Reward centred leaders don't see team development as being important. They stay involved in the technical areas but let someone else deal with the conversations.

Leadership can never be about the leader more than the led

Responsibility centred leaders help individuals set their work's general direction and stay informed enough to identify problems as early as possible. They also coach individuals to make it more likely that they will succeed.

Reward centred leaders use trust or a persons seniority as an excuse for not managing them.

Having Difficult and Uncomfortable Conversations

Management is the act of aligning people’s actions, behaviours, and attitudes with the needs of the organisation and making sure that little problems don’t become big ones

Reward centred leaders avoid difficult conversations by claiming not to have time or energy.

You can’t delegate that job. It’s yours and yours alone

Responsibility centred leaders understand that the most important discussions and decisions take place in meetings.

Communicating Constantly and Repetitively to Employees

Responsibility centred leaders see it as a tool for helping others understand and internalise essential ideas. They recognise that it is an emotional and behavioural process more than a transactional and informational one. It requires repetitive and tedious work from a leader. They are more concerned about employees being uninformed than they are about being criticised for redundancy.

Reward centred leaders worry that they’re going to insult their audience by repeating a message. They fail to appreciate that the purpose of communication is not their entertainment, nor is it simply the dissemination of information.

Will I be considered a micro-manager?

No. The goal is not to do our people's job. Instead, we are coaching them and making sure they have a good plan. It's also a way to know about any significant issues before it's too late to do anything about them.

How to have difficult and uncomfortable conversations?

We can emulate Alan (Mulally)'s approach to holding people accountable using his technique of 'joyful accountability'. Alan liked to approach people who needed correction and cheerfully let them know that it was entirely up to them whether they changed their behaviour or attitude. He would remind them that he would still be their friend if they couldn't change, but they couldn’t continue to work at Ford or Boeing. He meant what he said and was neither passive-aggressive nor condescending when he said it.

We can reassure people that we are not questioning their intentions. Suppose they seem uncomfortable or concerned with something we have said. In that case, we should see if we can ease their concerns by explaining ourselves.

How to receive advice?

You’d be a fool if you weren’t sceptical. That’s the only way you’ll eventually buy in

Even though we might not like the idea of admitting any weakness, we should not want to lose out on advice that other people might have for us. We need to acknowledge that they might know something we don't. But if they don't, thank them for their time and be the bigger person.

Most people we lead will not tell us the truth about our behaviour. It's important as leaders to surround ourselves with people who will be honest with us.

We should know what the most crucial part of our job is. This should not be based on a quantitative breakdown of our time but on what we do to help the business. We should also know if we enjoy the day-to-day stuff of being a leader.

Building an organisation starts by changing the behaviour of the leaders, which leads to behavioural change in the rest of the organisation.

If we don’t understand why we’re leading in the first place, none of it will make sense

[The] plan was the plan, and his job was to keep his company focused on it, not to move from one flavour of the month to another

The book is exceptionally well written. Even though it is short, the leadership lesson is powerful. I think everyone who is either a leader or looking to move to a leadership position should read this book. It challenges us to look at our motivations for leading.

I would be really thankful if you let me know by sharing it on Twitter. You can also support me by buying me a coffee 🙂